I mentioned earlier that these products must be approved by the FDA before they are sold on the market. [If you’re lost already, you might want to read Part I first]. Before anything, I think that it’s very important to mention the fundamentals of this agency before you read the following text. The Food and Drug Administration is an agency within the U.S Department of Health and Human Services that oversees the core functions of agencies involving: medical products, tobacco, foods, global regulatory operations and policy. Their responsibilities include: “protecting the public health by assuring the safety, effectiveness, and security of human and veterinary drugs, vaccines, and other biological products, medical devices, our nation’s food supply, cosmetics, dietary supplements, and products that give off radiation.” Their slogan: Protecting and Promoting YOUR Health.

Now with that being said, the FDA claimed that it has, “not found it necessary to conduct, prior to marketing, routine safety reviews of whole foods derived from plants.” So they have not found it necessary to conduct some of these reviews although the FDA has also stated that “theoretically, genetic modifications have the potential to activate cryptic pathways synthesizing unknown or unexpected toxicants, or to increase expression from active pathways that ordinarily produce low or undetectable levels of toxicants. Companies developing new ingredients, new versions of established ingredients or new processes for producing a food or food ingredient must make a judgment about whether the resulting food substance is a food additive requiring pre-market approval by FDA.” The recommendation for these companies: “consult informally with the agency on testing protocols for whole foods when appropriate.” Hmmm, isn’t this supposed to be a monitoring agent where standards are mandatory?  This all sounds optional to me… and according to the FDA’s Statement of Policy, “Section 402(a)(1) of the act imposes legal duty on those who introduce food into the market place, including food derived from new crop varieties, to ensure that the food satisfies the applicable safety standards”. Yeah, that definitely sounds optional and worst over like it’s “every man for himself.”

Opponents of GMO’s look at this type of lax behavior as a nice way of making things easier for big businesses, and putting our health in their hands. Why should we trust these businessmen to watch out for public safety and if that’s the case what’s the point of the FDA then? Naysayers of these Frankenstein foods, urge government officials to conduct strict testing of these products and to consider evidence found in other studies not carried out by these corporations. They believe that their studies have not been as rigorous as others held by outside institutions. Places like The Rowett Institute for example, has no bias to the subject at hand or interest in making a profit. They are simply interested in executing sound experiments to achieve factual results. It has been shown in their research and many others that these foods can cause abnormal growths in the test subjects (usually conducted on mice). Many believe the growths can be related to cancer and other deadly illnesses. The American Academy of Environmental Medicine (AAEM) reported that “Several animal studies indicate serious health risks associated with GM food,” including infertility, immune problems, accelerated aging, faulty insulin regulation, and changes in major organs and the gastrointestinal system. The tricky part is when these experiments are conducted, in order for results to present itself in a timely manner, higher dosages of the toxin or compound are given to the test subjects on a more consistent basis. The dynamics of seeing any effects in humans is much more difficult because we are not in a controlled environment, changing the doses of GMO consumption on the daily. Basically, some scientist concluded that it could take several years for any major abnormalities to occur and by the time they did, the last thing you would consider as a cause for it, would be your food! 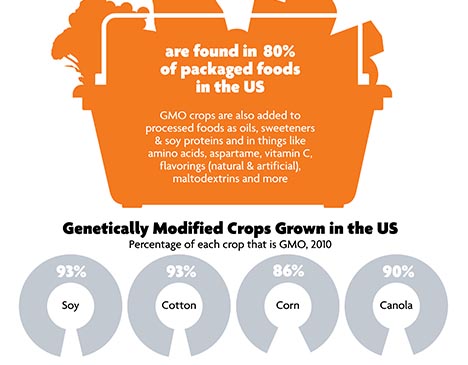 In addition to those findings, safety-studies have also shown the rise in food allergies since the introduction of GM foods. In the UK, Soy allergies have gone up by 50% and it has been found that the GM soy contains 7 times the amount of the known soy allergen than in its natural counterparts. This is caused by the added gene to that particular plant; derived from another species that contains the allergen. So this means you could experience an allergic reaction from a food you wouldn’t of normally been allergic to had it not been modified.  Another concern is the high level of pesticides that are used on the GM crops.  Bio-tech manufactures promote their herbicide-resistant products as environmentally conscious and will assist with preserving the planet. However, studies have shown that instead of reducing the use of pesticides, GM foods have actually increased the doses for it. The “round-up ready” crops made by Monsanto, for example, are designed to survive herbicides, but they have in-turn helped to create a resilient strain of weeds or “super weed” as they call it. This causes farmers to spray more pesticides to try to kill them, i.e. more toxins in our food, air, and soil. In 2004 Monsanto was actually found guilty in a case brought up to them regarding the use of their powerful pesticides. A French farmer named Paul Francois sued Monsanto because of all the neurological problems, including memory loss, headaches and stammering, he has suffered from after inhaling Monsanto’s Lasso weed-killer. The main ingredient in Lasso is alachlor and according to the U.S. Environmental Protection Agency (EPA), exposure to alachlor can cause damage to the liver, kidneys, spleen, and eyes, and may lead to the development of anemia and even cancer. It is interesting to note that Lasso has been banned in France since 2007, along with other types of pesticides, in an effort for the country to reduce the use of them all together. Maybe we should follow suit? Just saying…

Now for all of you thinking this type of “mad science” just started, I’m afraid you’re terribly mistaken. In fact this type of genetic engineering has been going on since the early 1900’s!! The food that has grown from these seeds has actually been sitting on our super market shelves since the 90’s. Crazy right? The first’s of many to be modified were tobacco, papaya, and tomatoes. So far the FDA has approved over 40 GM seeds and plants, which now make up about 70% of what you find in your ordinary supermarket.  However, looking at these products (at first glance) you would not be able to differentiate GM from natural/organic because a distinct label or mark has not been required yet. Many have been in support labeling and several organizations have gotten together to create “California Right to Know.” Through this advocacy group, Proposition 37 was developed. Their campaign surrounded the demand for labeling all GMO foods in order to give consumers a fair chance to decide for themselves what they would like to consume.  This ballot measure was sadly rejected in this year’s election. The opponents of Proposition 37 formed their own organization called “NO Prop. 37” comprised of GM loving companies like Pepsi, Kraft, Coca-cola, and Grocery Manufacturers Association. They found the initiative to be ridiculous and unnecessary, adding that the label would give off a negative impression on the consumers. Interesting…So its “safe” for us to eat, but it’s a problem to tell us we’re eating it? Yeah, that makes a whole lot of sense. It seems to me that companies are more concerned with profit than they are about their concerned consumers… Remember: we are what makes these companies/people rich, shouldn’t our opinion count?

Although you may or may not have made up your mind about GMOs reading this, we can at least agree upon one thing… continuous research should be done to ensure safety of these products. With everything that’s been said and presented to you, what’s important is that we as consumers keep ourselves informed. We must be aware of what is happening in the world and in tune with the decisions  being made by “higher ups” (government officials and big businesses) on our behalf (the public). This was the overall purpose of this post: simply knowledge, with the intent that if you know better you would do better. Like the late, great B.I.G once said, “if you don’t know, now you know”… and now the rest is up to YOU. 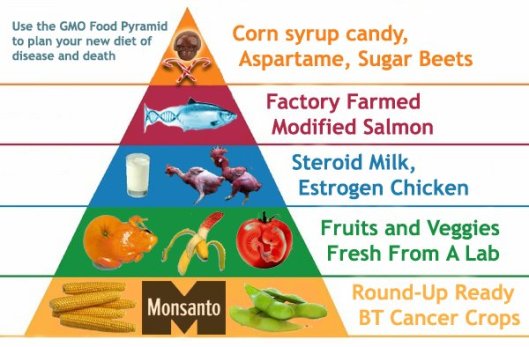 For more information on this topic, check out the references below!